Travels to Lubeck, Germany
I was away for 3 days last week at a work meeting in Lubeck in northern Germany. I left home at 730am on Tuesday and after travelling by car, 2 planes and a train I arrived at the hotel in Lubeck at 730pm at night - it would only be a 2 hour flight to Hamburg if you could fly direct.
I had 3 hours on Wednesday morning before the meeting started so I had some time to wander around the historic centre of the city, located on an island in the midst of the Trave River and was for many years the capital of the Hanseatic League (a medieval trading organisation) and its brick, Gothic style architecture, with its copper spires has led to its inclusion on UNESCO's World Heritage List. Many of its buildings were destroyed or damaged during World War 2 and much work has been done to restore it to its former glory.
It has lots of great little shops - a real haven for art and craft shops and it was just as well I didn't have more time to wander around.
It was a pretty city to wander around, with its cobbled lanes and streets, colourful painted buildings with their distinct facades and crow-stepped gables (reminding me of houses in NE Fife).  Two of the cities 4 gates survive, the Holstentor and the Burgtor and the city centre is dominated by 7 copper clad church spires.
The city is also famous for marzipan! Since about 1800, Niederegger have been making marzipan in the city. The shop and cafe on Breite Strasse have fanstastic displays modelled from marzipan - just wish I liked to eat it! 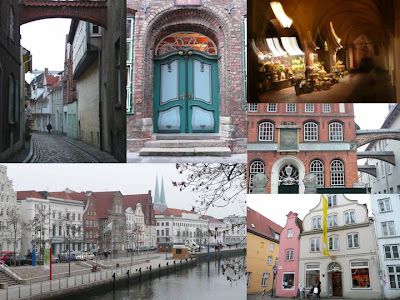 It wasn't the best weather for taking photos (very dull, but at least it didn't rain). 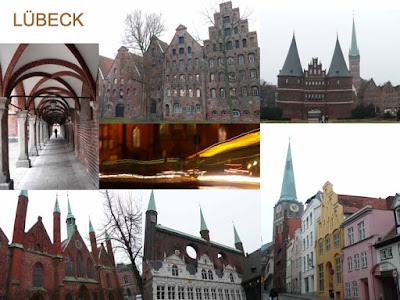 What a beautiful looking City.

but look how cute that pink teeny building is!!!

Wow! It looks incredible there!

I agree, Lübeck is a beautiful city! It's also extra-pretty at Christmas-time! We found a great little quilt shop there, too!!
Greeting from Denmark!
Mary Ann

Dan and I are planning a trip to Germany this fall. Maybe we can visit Lubeck.