Coraline, the teeny sweaters and the evil buttons 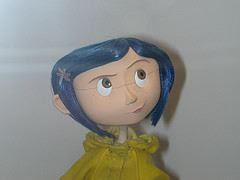 (Photo from Randi Mason's Flickr account - see more photos there)
I have seen news of the teeny jumpers and gloves worn by Coraline (in the movie based on Neil Gaiman's wonderfully imaginative book) popping up on a few blogs and so I've jumped on the bandwagon (not very original I know but I couldn't resist).
You see, Coraline has the cutest clothes - tiny hand knitted gloves and sweaters made by Althea Crome, the sets are all beautifully handcrafted and if you watch the trailer it says it talks about a world created from hand, like "a forest of cherry blossom made from hand-painted popcorn and 500 handmade Scottie dogs that fill a theatre!" How could I resist such temptation....
Using stop motion animation to make the film means that all the little parts have to be made by hand - this sneak preview goes behind the scenes... with meticulous attention to detail as outlined in this article in Metropolismag.com.

You can see photos from the film here and marvel at Coraline's world.

Ohhh this is amazing! I have never heard of the book and much less the coming movie. What a delightful discovery, all thanks to you!!! Now I need to find a news paper to see if it has come to norwegian movie theatres or if I have to wait some more. Been a long time since I was so eager to see a movie, tihhii...

I want to see this movie, but I'm afraid it will be too scary for the kids. Amazing how much work is put into a film like this.

I've just discovered we have to wait until the 8th of May to see it here in the UK!

Ooh I'm so excited about seeing this film - and devastated it's taking so long to get here!

You're a well seasoned traveller - could you not hop across the pond, watch it, then tell me all about it?! Better still - take me with you!!

That is a looong time to wait! Thought of you yesterday when they showed a segment on "how the movie was made"...where was it...oh on David Letterman. Anyhow; amazing! It just made it even harder to wait to May.

I have to see this now! Eva at Effunia posted about it too! Caroline wants to see it also!