Woollie Weekend
Well, part of it anyway, wandering to the East Neuk of Fife, again!
After a morning coffee with my friend Allyson, I met Andrea and we headed of the fishing villages of Fife for an afternoon of wandering. First stop was Pittenweem (can you see a pattern here?) where we went to The Cocoa Tree for chocolate! It's a chocolate shop and cafe, beautifully laid out and with a real cosy feel. The chocolate all comes from Belgium and the hot chocolate looked amazing - you could even get an espresso style hot chocolate flavoured with chilli! I had crepes and a vanilla milkshake and then managed to buy a few squares of chocolate with different flavourings.....violet, orange, green tea and chilli! 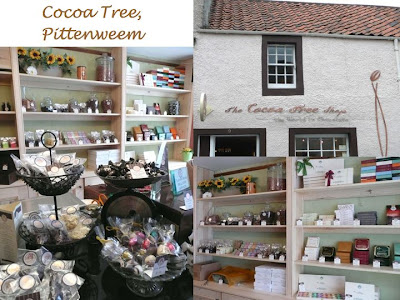 After, we went to Crail, another old fishing village about 10 miles along the coast where we found a sheltered spot and soaked up the sun for 40 minutes (like Russians in a cool Moscow, trying to get our daily dose of vitamin D - as it was only 57/14 degrees).

Crail has the cutest harbour and is often full of people on painting holidays sitting in front of an easel focusing on the view or the architecture, the crow-stepped gables, the forestairs (outside stairs) and the marriage lintels. I love the harbour wall with it's giant stones and the lobster shack where you can buy lobster and crab on a Saturday and Sunday from 12 to 4pm. 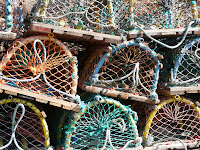 In 1310 Robert the Bruce confirmed Crail's Royal status with the right to hold markets on a Sunday and for a time the town's Marketgate became one of the largest market places in medieval Europe. The west pier on the harbour was built in 1826 and was designed by Robert Stevenson, grandfather of author, Robert Louis Stevenson - think Treasure Island - whose family were famous lighthouse builders). 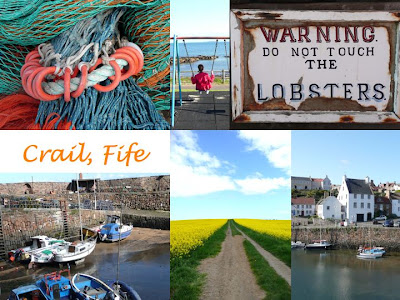 In the playpark we had a go on the swings, Andrea said it was nice to be able to see the Isle of May in the Firth of Forth from our swinging perch and I was reminded of the time when I went with the National Trust to Islay and we sat on swings looking out to sea and I was able to see Ireland, it's not often you can sit on a swing and see a whole other country!! We had to leave the swings when it became obvious that we were stopping small children from having a swing :o) 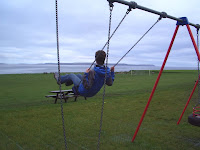 You are really good at designing postcards!

I had to laugh because I have always loved to swing too!! It's been a long time, but I think I may have to find one soon! Your photos are gorgeous... you should be designing postcards! And the chocolate shop looks delicious! It reminds me of the movie "Chocolat"! Chili pepper and chocolate are a powerful combination!

chocolate!!!! and i love being included in your walks and adventures!

Your photos make me feel like I just took a mini vacation-lovely!

beautiful pictures and lovely stories. I love to travel through your wanderings, Di.