Wanderings - Berlin
I had the opportunity to wander to Berlin this weekend. I had a work meeting on Friday, meeting with some potential project partners from around Europe to try to get some funding for a project aimed at promoting the North Sea Region as a screen location and to develop the media/screen industries in our area. As it was the Berlin Film Festival this week, Berlinale, it was a good opportunity to meet everyone in the one place.
I have been to Berlin once before, just prior to Christmas 2006 so it was nice to go back at a different time of the year to see the City without it's Christmas garb on!
It is a city with so much history, much of it tragic, that is seems at some points to almost be a large open air museum  - see the remains of the Berlin Wall, Checkpoint Charlie, the Brandenburg Gate and then realise that 18 years after the wall came down, the difference, at least in the City Centre, between former East and former West is negligible.
Whilst I was at the airport in Glasgow waiting for my flight, I bought a book called The Berlin Wall - it is a history of the wall and so far making for interesting reading. The wall came down on my 20th birthday (9th November 1989) and I feel some connection to that moment. It was one of the biggest political events of the 20th century and because it happened in Europe I felt it's impact.
But visiting the City I realised that I knew very little about the events and it was interesting to learn more as I wandered around. Standing in areas that 20 years ago were no-mans land, looking up at the gleaming towers in Potsdammer Platz, watching as people wander through the Brandenburg Gate without question or sauntering past Check Point Charlie, symbolically remaining in the middle of the City.
I loved wandering about Hackescher Hofe - a beautiful series of courtyards renovated to create a series of quirky shops and cafes, fronted by art deco buildings and home of the delightful Ampelmann shop
.

The Ampelmann is the former East German crossing man, you know the one you see on pedestrian lights, created in 1961 - after the fall of the wall, when the crossing lights were being upgraded they replaced the cute little Ampelmann with western lights - there was an outcry, the cute little Ampelmann in his little hat became a mascot for the East German nostalgia movement. He started to reappear in former eastern areas of the City and even in some western areas. Indeed, a female version can now be found on crossing lights in the city of Dresden. 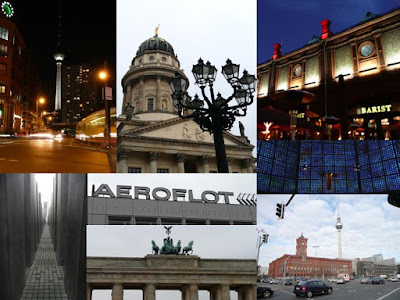 Thanks for taking us with you on your visit.

Thanks for posting so many details of your trip! I have a special affinity to this part of Germany as my Dad was born in East Germany during the war and escaped with my Grandma. I would love to visit someday... but I really love to see it through your photos too!

What great pictures and a great opportunity for you!

Di, I love Berlin, too and will be there in April...
My kids were born 3 days before the wall came down and my sister (at this time living in Berlin) visited us and was a little sad about missing the best part of the history of Berlin!!
As you say: it's a living museum.
During the time of separation it has also been way creepy, driving through GDR to get there and being controlled several times....

Thanks for the journey!!

Thaks for the visit - I was there in 1990 on reunification day and would love to go back and see it all now.

I always love to see where you've been and read your stories. I can live vicariously through you, as travel in not in our foreseeable future!

I'd love to go to Berlin- this is a wonderful post.

the picture in the upper left corner is spectacular.

thanks for sharing your travels

hello! Thanks for leaving a kind comment on my blog, I love your blankies and Berlin sounds great!
: )